By law Canada Post publicly announces its planned annual rate increases, and those increases are duly reported in the media. To the public, the reported rate increases seem reasonable and uncontroversial, usually in step with inflation. But Canada Post has other, more subtle ways of raising prices, and it has not hesitated to use them. Over the years it has redefined its services in ways that have had the effect of increasing costs by much more than the publicly announced figures. Some of those changes have had profound effects on the mailorder industry in Canada.

In 1989 what was previously known as "first-class mail" was replaced by a new class of mail called "letter mail". At first it was possible to send small packages up to 500 grams by letter mail. Then in 2005 Canada Post radically altered its letter mail service by imposing draconian size restrictions that effectively ended letter mail as an option for shipping most small packages. After Sept, 2005, all domestic packages thicker than 2 cm had to go as a parcel while U.S. and international packages had to be shipped as small packets. The cost increase for anyone routinely shipping packages under 500 grams was astronomical, especially for domestic shipments. Absurdly, it is now costs more to ship small packages within Canada than it costs to ship those same packages out of the country. After the imposition of the 2 cm rule the postal rates simply did not make sense any more.

Below is a chart that compares the cost of shipping small packages thicker than 2 cm. The rates used are current as of January 2012. As the chart shows, U.S. companies can ship small packages to Canadians for far less than Canadian companies can. Those U.S. packages are delivered to Canadians by same Canada Post employees using the same equipment as the packages mailed by the Canadian companies. To many observers it is clear that Canada Post is abusing its monopoly powers to charge Canadians injurious rates to ship those same small parcels.

An Unbearable Lightness of Being 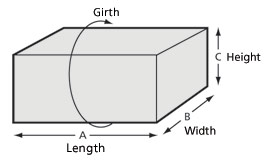 For more than a century Canada Post charged for parcels based on the parcel's weight. But in 2000, Canada Post began charging for some parcels based on an imputed weight calculated from the parcel's length, width and height. Parcels weighing less than this "dimensional weight" were now charged for the higher imputed "weight". For many shippers selling products that needed large boxes to cushion them from rough handling, this resulted in a dramatic increase in shipping costs. Canada Post claimed that its move was a revenue-neutral service adjustment designed to rebalance its parcel revenue across all the different sizes of parcels that it accepts. Inescapably this claim meant that denser parcels now should have cost less. But a reduction in parcel rates for denser parcels never occurred.

"Cubing" equipment was (and still is) very expensive, and only the largest mailorder shippers had it. But Canada Post insisted on shippers paying for the higher dimensional weights regardless. It began auditing the weights of parcels reported by shippers to ensure that shippers reported correct dimensional weights. When parcel weights were found to be under-reported, Canada Post charged shippers for the difference. But when shippers over-reported weights, as happens with inaccurate equipment or manual measurement, Canada Post never refunded customers even after shippers complained.

The abusive manner in which Canada Post implemented its cubing policies led to the launch of a class action lawsuit led by Lee Valley Tools, a well-known mailorder company near Ottawa, on behalf of all Canada Post business account holders that shipped parcels and were charged rates based on dimensional weights. The lawsuit alleges that Canada Post illegally charged dimensional weights in contravention of the Weights and Measures Act. Canada Post and the plaintiffs reached a $5 million settlement that was approved by the Ontario Court of Justice on October 30, 2013. The court ordered Canada Post to stop expressing dimensional weight in terms of units of weight.