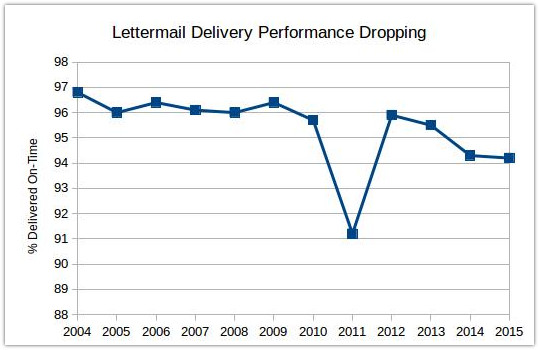 In 2009 Canada Post exceeded its on-time delivery performance target for Lettermail. It claimed that 96.4% of letters were delivered on time, narrowly beating its target of 96%. Performance levels have never topped the 96% level in the years since.

Despite falling performance results, Canada Post still claimed that it was beating its Lettermail delivery targets in 2012 and 2013, reporting on-time delivery levels of 95.9% in 2012 and 95.5% in 2013. It never said what its goals were for those two years, but clearly the only way Canada Post could exceed its target with numbers less than 96% is if the target had been moved lower. As performance levels continued to decline in 2014 and 2015, Canada Post stopped talking about Lettermail performance targets altogether.

Canada Post's parcel delivery business has been the lone bright spot for the company. Business is growing, with parcel volumes up 13.5% domestically and 9.7% overall in 2015. Despite the rapid growth, parcels still only contribute 26% of total revenue, and the revenue boost from the increased parcel business barely makes up for falling revenues in the company's transaction mail and admail businesses. Still, it is easy to understand why Canada Post sees its future in parcels.

But how well is the parcel business doing from a delivery performance standpoint? Although Canada Post claims that its parcel delivery performance is exceeding targets, whatever they may be, it keeps its on-time delivery performance results secret. But because domestic parcel services Priority Parcel, Xpresspost and Expedited Parcel come with a delivery guarantee, Canada Post has established guaranteed delivery times for every Forward Sortation Area (FSA) in the country. So if parcel delivery takes longer than the service guarantee for a given FSA, the shipper can claim a refund for the postage paid. Many shippers probably do not claim refunds for late delivery, either because they are unaware that they can claim a refund or because the time and trouble to claim a refund are too much. But Canada Post's largest customers almost certainly are claiming refunds for thousands of late parcels and getting big refunds.

In what may be an indication of the scale of the problem, we discovered that Canada Post made major changes in 2016 to its service guarantees for the three guaranteed domestic parcel services. Our analysis of the three guaranteed parcel services showed that Canada Post lengthened the delivery times for almost 15% of delivery points at the FSA level across the country for parcels originating from a specific postal code located in the Greater Toronto Area. In most cases a day was added. This means that parcels that were one day late in 2015 are now considered on-time.

For guaranteed delivery times to be changed at this large a scale suggests that Canada Post is having serious problems in its delivery network, and is getting hit hard with refunds. So rather than fix the problems in the network it chose to lower the bar by lowering service standards. That it did this without telling customers, and without a concomitant reduction in rates, is unconscionable. Not only did it lower the bar on delivery standards, it gave its customers less reason to trust Canada Post.

In September 2016, Canada Post advised its customers by letter that Expedited Parcel delivery standards will be downgraded during the 2016-2017 holiday season. From November 21, 2016, to January 6, 2017, service guarantee claims will be honoured only if parcels are two days late instead of the usual one day. The announcement confirms our contention that Canada Post is experiencing problems in its delivery network. Instead of offering to reduce prices for reduced service, it has chosen to shaft its customers with an inferior product. In the eyes of business users, a longer delivery time for the same price is functionally the same as raising the price for the same delivery time. Over the past decade Canada Post has found many ways to increase the cost of its services beyond its annual inflation rate increases. Package size limitations, lower delivery standards, and the elimination of services, are some of the ways it has reduced the value proposition to its customers.

Instead of rolling out new services that it is ill equipped to deliver, Canada Post needs to focus on its bread and butter -- its delivery network and the value it delivers to its most important customers, the business customers of Canada. A change of priorities is sorely needed at Canada Post, starting with new leadership.